In modern art, there are a number of movements that placed playfulness and fantasy at their center: Surrealism, of course, but also Da 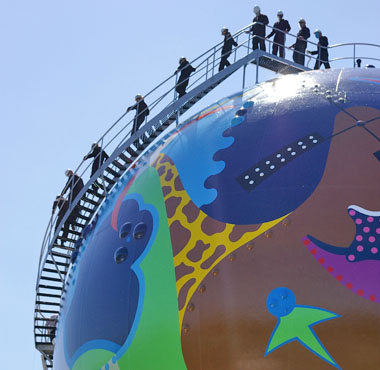 da and pop art. Toyism is the latest movement in this tradition: it subverts the canon to put the fun back in art. What’s interesting about this game-like movement is the fact that it’s rule-bound. In this respect, it goes against the postmodern assumption that anything goes in art. Since the 1960’s, we’ve come to believe that art is what the artists and public make it to be: it’s a realm with consecration (since some artists become better known than others), but no formal rules or boundaries.

Toyism has some affinities with postmodern pop art, but it’s more quirky, introspective and rule-bound. In the early 1990’s, Dejo, a Dutch artist and musician, introduced Toyism to the public. The membership of this group oscillates, usually between 13 and 20 members, but it cannot exceed 26 members: one for each letter of the Roman alphabet. The artists, including the founder, all work under pseudonyms, to allow for greater creativity and freedom.

Their works are figurative and narrative: they represent recognizable objects and every picture or sculpture tells a story. They tend to use bright and distinct colors, rather than mixtures, for greater contrast and visibility. For this reason, Toyist art is very eye-catching. Although a lot of it looks playful and fun–similarly to Miro’s Surrealist doodles–it often deals with serious themes. The Toyists work in many media and genres–including paintings, silkscreens, giclees, prints, jewelry and sculptures–so if you think this kind of art fits with your style or vision, give them a try on toyism.com

In all Seriousness: Playing with Toyism