In the run-up to the anniversary party, toyism has given various guided tours and presentations to small (+/- 10 people) and large groups (+/- 80 people) interested parties. As well as a presentation and workshop at Parcival College in Groningen, where toyists gave a lecture on toyism as an art movement and, together with students, painted masks that were used during the anniversary opening and then spread over the 25 locations of the subsequent Toyism Takes Over exhibition.

Although under time pressure due to the tight planning for the completion, the work went well and as the date for the final exhibition, Saturday September 2nd, approached, a lot of energy and attention was also devoted to invitation policy, promotion / publicity and contacts with the press. both with the regular press and with the trade press, as well as with the content, organization and implementation of the program for the exhibition day itself, which was to take place in the style of a Venetian carnival.

The official opening had a complete program with a special speech by Annabelle Birnie. Special for us as an art movement in how it interpreted 25 years of toyism in comparison with other well-known art movements and / or artists. And, for Drenthe in particular, the interpretation of the importance for the province of the presence of an international art movement within its borders (see speech). The revelations of the large screen “Grand Carnaval” made especially for this anniversary exhibition and the unveiling of “The Flying Dutchman”. There was musical accompaniment from the Vocal Ensemble of G.S.M.G. Bragi from Groningen and DJ Maxim van de Veen (Party Sensations) from Zwolle, the presentation of two special Toyist beers for the occasion and 25 silkscreens worth €16,000 were raffled among the 250 attendees in the context of ‘our birthday celebration’.

At the opening, 10 toyists from the Netherlands and abroad were present. In addition to Dutch guests, there were also guests from Romania, Portugal, Germany and Iceland. Characteristic of the international character of the toyism art movement. The theme of the opening was “Grand Carnival”. All guests were asked to come masked, as was done. Entirely in line with the toyism philosophy in which artists and guests have formed a collective to celebrate the anniversary and art together.

During the anniversary exhibition, a total of 129 works of art were exhibited. These works consisted of 104 paintings, 7 sculptures and 18 graphics (silkscreen & piezo graphics). There were also works of art from private collections of collectors who made their toyism artworks available especially for this exhibition. A special aspect of this exhibition because these works can never be admired by visitors in real life. In addition, a series of Mind Games has been made especially for this exhibition. Toyists from the Netherlands and abroad have contributed to these works. In addition, a number of new toyism works of art have been shown that have not been seen before. 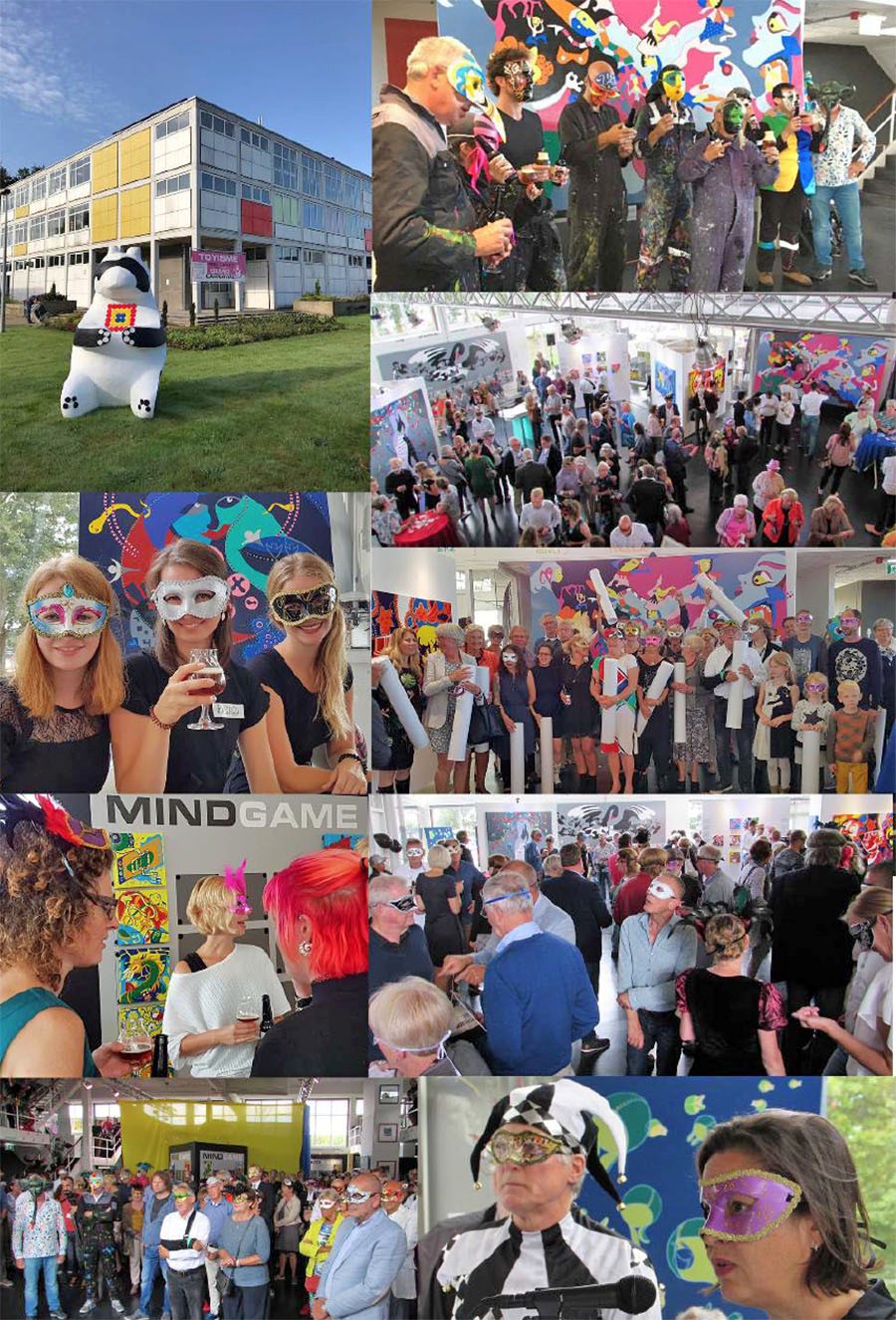