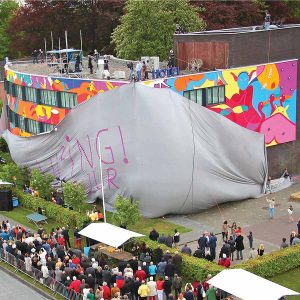 Project “Dreams for Breakfast” is the second major project of the Toyists, after the painting of the gasholder “The Dot” in 2010.

In april 2012 the Toyists started with the painting of the outside of the hotel. During five weeks the hotel was hiding behind a huge scaffolding with canvases, on which the names of the sponsors were mentioned. In total 55 companies from Emmen have contributed to the project “Dreams for Breakfast”.

13 Toyists have expressed their creativity from early morning until late at night on the 600 m2 facade of the building, so that on May 16, the canvasses were dropped, under the leadership of beautiful music of DJ Steff da Campo. With a final result the first Toyism hotel in the world!

Narrative: Two courting people are surrounded by – or even seem to be composed of – fine delicacies that a hotel offers to its guests; croissants & curly butter, fried eggs, coffee & cupcakes, strawberries, cherries, a melon, a French bread and red wine. The beloved couple has left its clothes in the suitcase under which the coat hanger dangles, the female firmly holds the key to their room and the pair is accompanied by some dreamwalkers. Try to discover the cheese, an essential element to every breakfast.
Both the northern and southern side of the building show the face of the ‘sleeping beauty’, surrounded with her dreams. The northern side represents the horse riding angel that has visited Charles the Great in a dream and ordered him to steal, as described in the legend of ‘Charles and Elegast’, it looks as if this angel is trying to steal our dreams. The sleeping beauty at this side is dreaming about the coming success of the local zoo of Emmen, that is subject to be rebuilt. She fantasises a hippo, a banana transformed to a monkey, some ducks en sheeplike clouds. Sheep can also be found at the southern side of the hotel. This side is dedicated to what is probably the oldest village of the Netherlands, Noordbarge. The gingerbread man stands in front of the traditional bread oven. The sleeping beauty on this side of the building wears a chicken on her head that has laid a beautiful egg and on which the cockerel proudly watches over. The chocolate brown cow is of course not forgotten. All these products form the basic ingredients for many delightful dishes the hotel has to offer.

The project “Dreams for Breakfast” told of course about sleeping and eating, but also about the imminent new Zoo Emmen and the old village Noordbarge. So there are multiple themes incorporated in the building. Also now one room is ready, the “Dance of Love”, a super romantic room which is fully painted, including ceiling and doors!