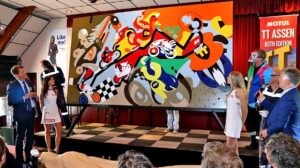 The project is commissioned by Tour de TT. The painting is owned by the municipality of Assen.

It is said that in space from one point to another one cannot travel faster than light, but there has been a “shortcut” in Assen since 1925. This short path is also referred to as the TT circuit where drivers race faster than the speed of light. Drivers of all vintages fly around the track like wormholes through time. It was in the year 1925 when Piet van Wijngaarden (wearing number 36) crosses the finish line first, like a true horseman (1HP). He did it again on his Norton Paardje (Norton-Horse) in 1926.

From underneath him on the Ossenbroeken, Giacomo Agostini, pops up at the hindmost part of the Drenthe circuit, leaning forward on his faithful Agusta. He has won no less than 14 times in various classes. He rightfully wears number one. The year 1990 changed the circuit into a big rodeo – led by none other than Kevin Schwantz. This Texan cowboy – wearing his famous number 34 – flies through the wormhole. He has won the premier class three times in 1990, 1991 and 1993!

The biggest one-day event in the Netherlands also points out to be a great circus in 1980. This is reflected by Jumping Jack Middelburg, wearing number 8. He pounces upon the circuit like a circus horse and runs off. Jack finishes first and becomes a true folk hero. The first edition after the war in 1946 was won by Dutchman Piet Knijnenburg on his German BMW. Its 32 horsepower engine was able to reach a top speed of 180 km/h. With an average of 180 km/h and a top speed of over 300 km/h, flying speed demon Marc Marquez races his Honda through the Duikersloot and wins the GP in 2014. Wearing number 93 (his year of birth), he kicks everyone else’s butt and becomes world champion whilst in his debut year in 2013. He shows great promise for the future.

The year is 1977. Assen is startled by a white giant. Wearing number 30, Wil Hartog gains success on his Suzuki as he passes the checkered flag first. Assen becomes mad! This achievement has even resulted in a factory contract. Valentino Rossi (alias “The Doctor”) is one of the greatest drivers of all time and a true box office hit in Assen. Paying his respect to the event in 1997 – wearing number 46 – he passes Hartog from underneath and wins the GP class as many as six times. The embodiment of motorcycle racing sends its perfectly cut machine via Ramshoek towards the famous circuit corner by the name of “Geert Timmer” (GT wins Assen no less than 4 times).

At that very corner the golden sidecar kicks in, driven by Streuer and Schnieders, crossing the finish line first in 1987 and 1991. They become world champion three times; in 1984, 1985 and 1986 and are therefore reckoned Hollands greatest wholesaler in precious metals. 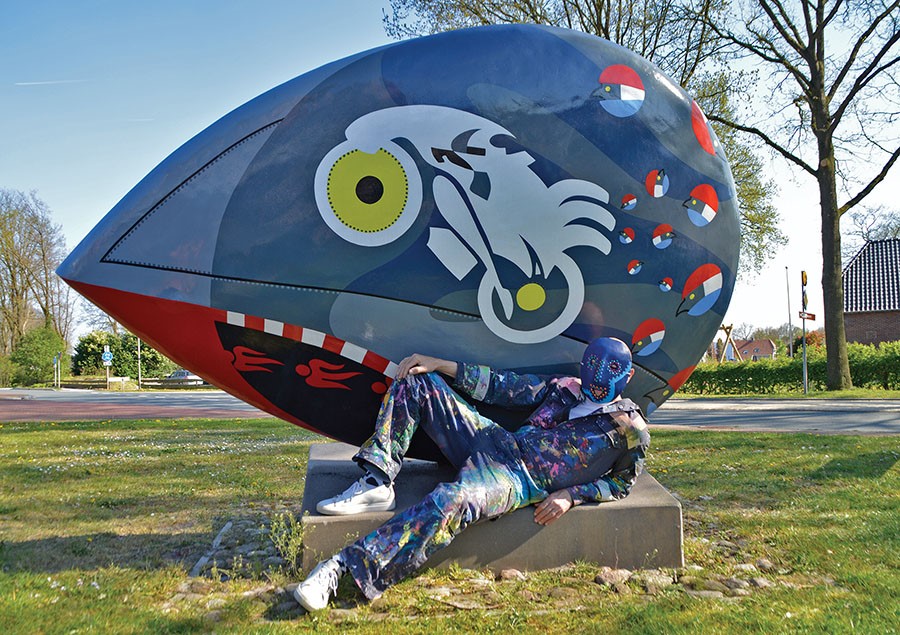 Sculpture in Hooghalen: Fast Invasion. Owned by the Municipality of Midden Drenthe.

Sculpture in Grolloo: Public attraction. Owned by the Municipality of Aa en Hunze. 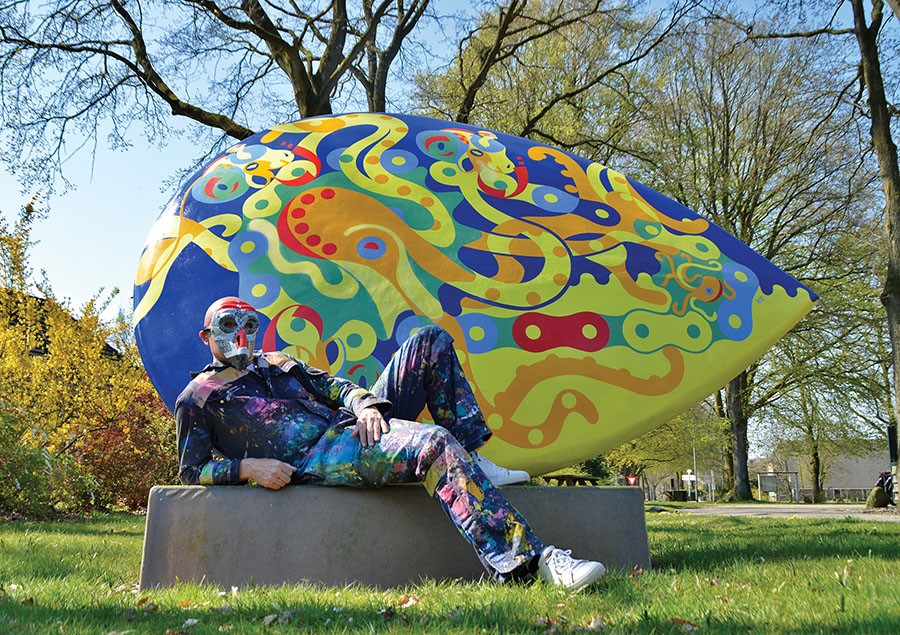 Sculpture in Schoonloo: Infinite chain. Owned by the Municipality of Aa en Hunze. 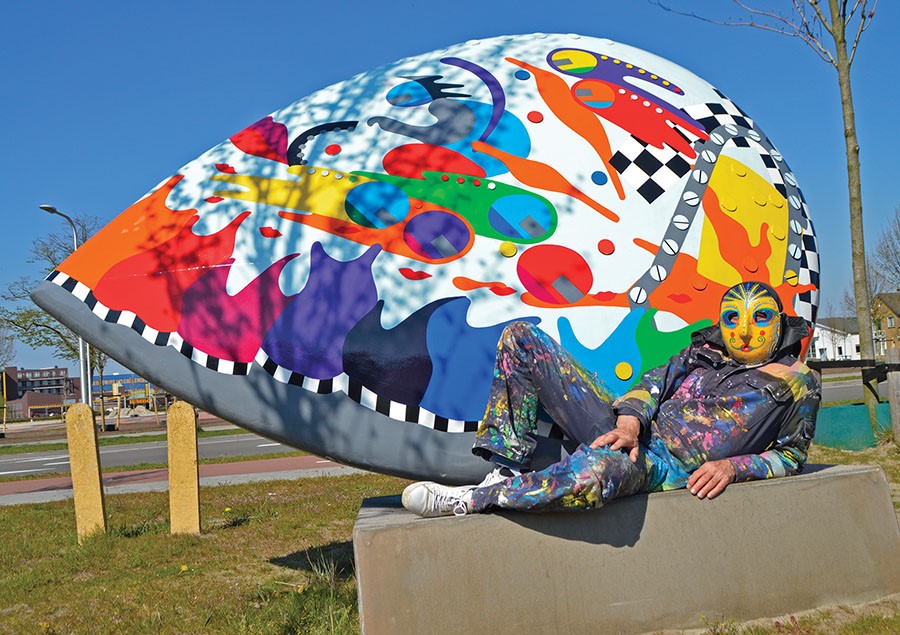 Sculpture in Assen: Moto GP upside down. Owned by the Municipality of Assen. 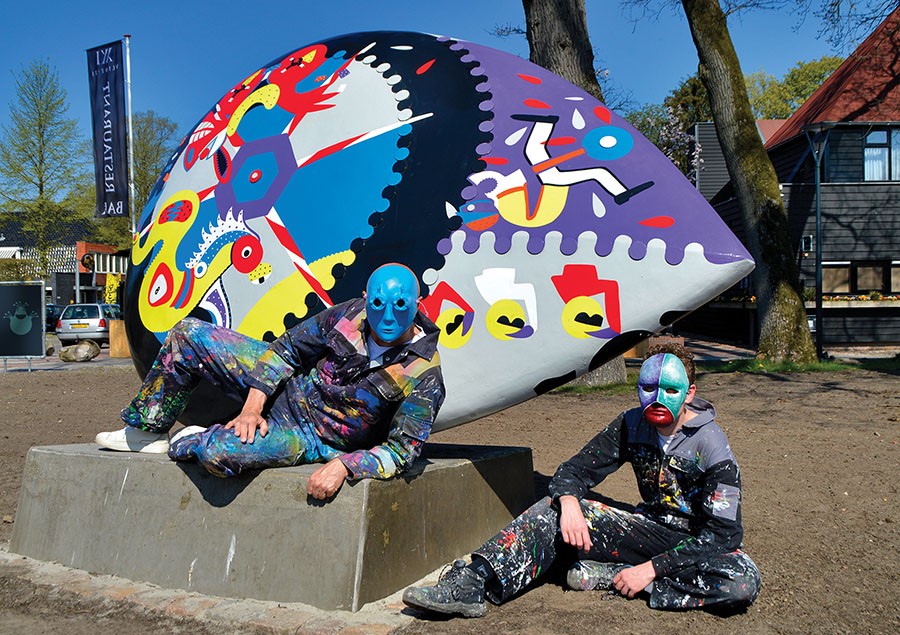 Sculpture in Borger: The sweet battle on the racetrack. Owned by the Municipality of Borger-Odoorn. 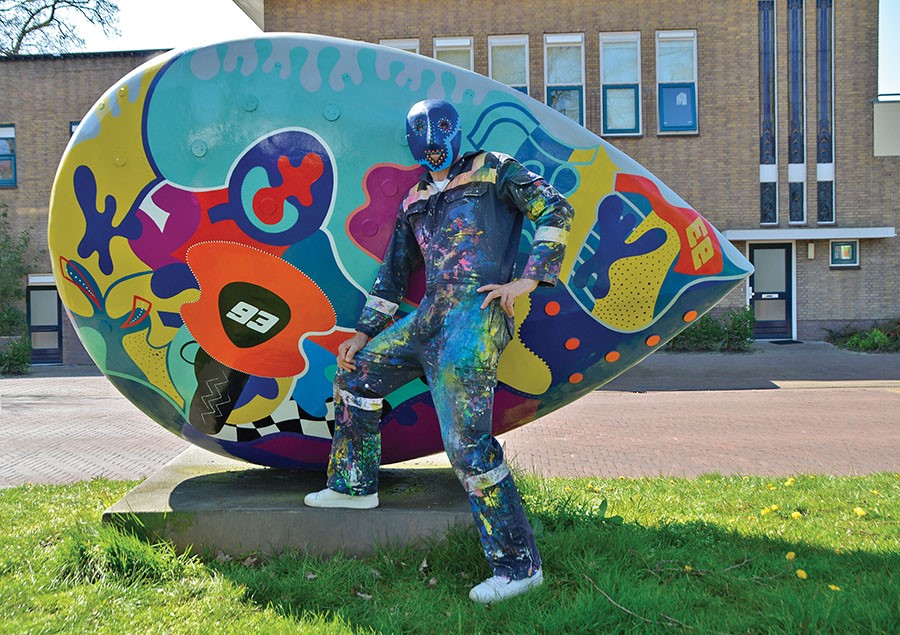 Sculpture in Rolde: The spirit of racing. Owned by the Municipality of Aa en Hunze. 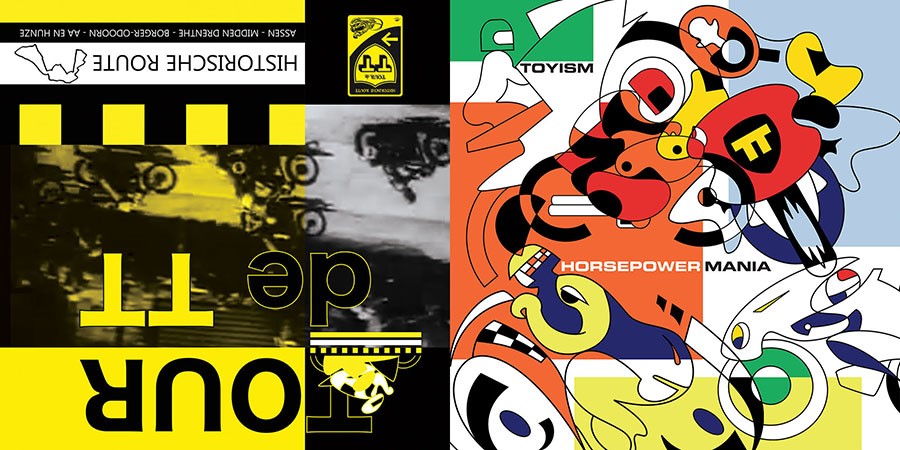