The Philosophy of Faith, Hong Kong 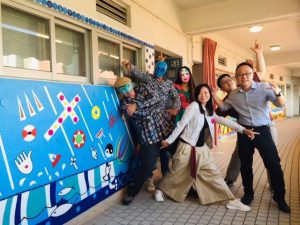 In Hong Kong (China) toyism set up a community art project in collaboration with Kei Faat Primary School (Yau Tong) and TongLau Space. The toyists worked together with students, parents and teachers to create six murals. Also more then 500 3D dots were painted by the students of the school, these dots also became part of the artwork. The overall theme of the murals is Noah’s Ark. Elements from the original story are used, namely the ark, animals and duality. The ark and animal elements were combined, each mural has an ark in the shape of an animal plus the corresponding animal characteristics. Each mural was given a subtheme to express a certain duality.

Searches for Noah’s Ark have been made for ages and believers in the myth continue to search for it in modern times. While a literal Noah’s Ark did not exist, nor is there geologic evidence of a biblical flood, believers throughout history have tried to rationalize the Ark’s existence. When the flood was imminent, a pair of every land animal and bird, a male and female, was sent to the ark. What is rather strange and contradicting in this myth is the fact that birds can fly, even when it’s raining.

The story of the Genesis flood has inspired Toyism to put this myth in a more different, funny, colourful and modern perspective, though the message is clear. Each painting has a variation to the Noah’s Ark myth. Instead of the land animals and birds that have set foot in the ark, we have chosen these animals to be the ark itself. Though the myth just talks about land animals and birds, we have created a fish ark as well. This fish, a lionfish, includes symbols of the religions and irreligion. That is, they need to be saved for the future (as humanity will keep having discussions).

Thus, we have designed the following animal Ark’s:

Ark 1: Puppets
The Chameleon Ark
Here the Toyism puppets are used for artists in general. Art is important and art should be saved, after the flood. The chameleon ark takes good care of this. Check it out and find the Toyism artworks in this mural.

Ark 2: Religion vs. Paganism
The Lionfish Ark
Symbols of the religions and paganism falling in the Lionfish Ark are to be kept for the future. We all should live in peace and harmony, no matter what kind of belief or nonbelief you preach or have. Can it be real, or is this just wishfull thinking? See the angels pulling the ark on the left side while the devils resist.

Ark 3: Food
The Bee Ark
This special and healty bee ark rolls on the fruits. In the modern world, we eat a lot of unhealthy food. The choice of food and the way we consume it has great effects on our body. This bee shows both healthy and unhealthy food. Find them and choose which one fits the best for you.

Ark 4: Black – White
The Panda Ark
Here the panda is not illustrated in black and white as we know it to be, but he has coloured parts on the body. Propelled by legs of the zebra, he takes all sorts of different origins. Whether you are white, black, yellow, red or brown, the panda ark unfailingly takes you with him. Discrimination no longer exists here.

Ark 5: Children
The Leopard Ark
The leopard ark is the fastest of the ark family. He is equipped with wheels and his rapid locomotion leaving the big flood behind him. Per two (regardless of their sexual orientation, boy and girl, boy and boy, girl and girl) children ride along with him, on their way to a new future.

Ark 6: Masks
The Peacock Ark
This colourful bird flies high in the sky, saving masks. Masks have been used for both ceremonial and practical purposes. Normally worn on the face, they are typically worn for protection, disguise, performance or entertainment. In Toyism, the mask is rather important; every Toyist is equal, purposely not showing the face. People recognise a Toyist by his/her mask. Do you also?

Despite all paintings look totally different by colour, we used the same 13 colours in each mural.

Also watch the short documentary by Hong Kong CableTV about the project below. 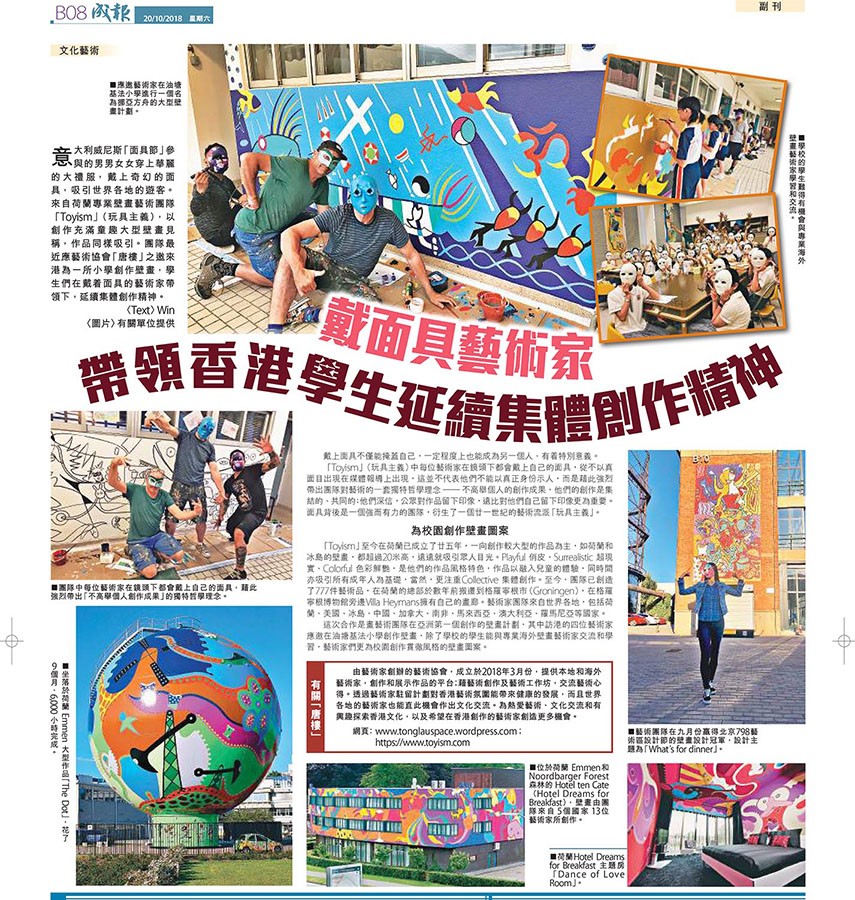