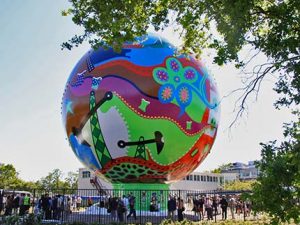 Commissioned by the municipality of Emmen and the Foundation Living Industry.

DESIGN OF THE DOT

The Dot is bursting with energy! The blue gas globe of Enexis in Emmen has been painted and transformed into a true work of art. Four elements form the basis of the design, the four energy sources being solar energy, wind energy, water energy and fossil fuels. Artists from across the world worked on the scaffolding for no less than eight months. Transforming the globe into a Toyistic art piece is an idea that originates from late 1997. In 2004, a trust is founded and eventually results in the commencement of the painting on July 27, 2009. After just over eight months and having worked 6000 hours with seventeen Toyists, The Dot is finally revealed in a festive manner on June 4, 2010. The height of 22 meters and a surface of 1250 m2 makes this artwork unique in The Netherlands.

The four classical elements of life – Earth, Water, Air and Fire – are featured in this painting of The Dot Project to show the history of energy production. The Dot Project is accomplished through commissioning by the “Living Industry” foundation in cooperation with the municipality of Emmen, the Province of Drenthe, Enexis and Holland Coating.

The design: The 4 elements of life are represented by 4 themes that form the basis of the design, namely the 4 energy sources.

In addition to these four fundamental themes, there is a single, central figure: the tree. The tree is a metaphor for life, energy, growth, development, and change. There are four sub-designs used. Each sub-design presents the combination or contrast of old and new forms of energy production and their applications (the sciences).

An old form of the use of solar energy is photosynthesis; the mechanism by which plants and trees grow due to water and carbon dioxide from the air being converted into glucose. A new form is the collection of solar energy with the help of solar panels. An application is the (hybrid) car (economic science), which is charged by electricity that is again generated by solar panels. Houses are also heated by solar energy. As the rays of the sun strike the roof of the farm, energy is collected by the solar panel window.

Old: the traditional windmill, where the power of the wind is converted into mechanical labour, namely for grinding grain. Link the mill with bread, and crumbs are carried by the wind to the modern wind turbines where the kinetic energy of the air is converted into, for example, electricity (new). One of the windmills blows wind into the sail of the boat, while the cabin forms from the roof of the farm. Another windmill in bird form imitates a giraffe affording a panoramic view of new applications for the future.

Old: using paddles to transfer the current of water into rotational energy a watermill, just like the old windmill, has a direct application, namely the grinding of grain or the pressing of oil. New: hydrogen as fuel. Hydrogen fueled cars are much cleaner for the environment. A large dolphin emerges from the water. Drops of water turn into goldfish and salmon.

Old: coal, peat and oil. The prehistoric nodding donkeys obtain fossil fuel from the ground. The elephant stomps the ground while a huge dinosaur emerges in the background. New: bio fuels, nuclear energy. A nuclear power station discharges clouds of smoke that fly through the air like atoms. Biogas as a clean fuel: cars that run on biogas that is extracted from the ‘excrements’ of the piggy bank. Springing from the ancient peat bogs as the lifeblood and central focal point of the design is the red tree, which forms the basis for new and green energy forms. The electrical sockets in the tree deliver green power.

In addition, in the form of standalone motifs, general applications or containers of energy such as ecobunny lights and battery-insects can be seen moving throughout the whole painting.