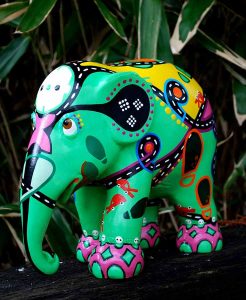 Commissioned by The Elephant Parade.

The E-Phant is an electronic and energy efficient charging point created with green energy and sustainability in mind. It is in line with our major project entitled Living with Energy – the transformation of a 22-meter high spherical gas container in Emmen. Its ears are solar energy collectors that store energy and then send it off again via the socket. This sits atop the head of the elephant in the shape of a face. Just plug in and drive away…

In addition, two highways run over the entirety of the elephant: a green highway that stands for environmental friendly living and a red highway with red polluting cars driving on it.  The red cars are chased off the road by the green cars and swallowed up like Pac Men. The roundabouts are marked with the letter E for E-Phant (Energy Phant). The big footsteps that have been painted on the elephant in places symbolize people who are energy efficient and choose green energy. A polar bear is shown on the back of the elephant symbolizing the melting of the ice caps. An anteater is sucking up the red cars. The elephant’s tail changes into a cobra that poisons the red cars with its tongue.

This elephant stands for energy efficiency and sustainability. Special feature: The elephant has solar collectors in its ears that power the surrounding 20 led bulbs.” In today’s crowded world there’s simply not enough room for the Asian elephant. Thank you for joining Elephant Parade’s campaign to turn this around – we’re reconnecting their forests and saving their jungle homes.

In the light of the 75-birthday existence of the Emmen Zoo, the Elephant Parade started on Wednesday 12 May in the city of Emmen. Last year started in Amsterdam. Known artists as Corneille, Ans Markus, Henk Schiffmacher and Jan des Bouvrie have designed/painted an elephant for the charity Elephant Family, set up through Mark Shand. The Asian elephant is serious threatened and with the donation elephant hospitals can be built and land can be taken on lease where they can live undisturbed .

The Toyists have been approached by the organization to make a design also. The elephant is called E-Phant and is bought by a company in Emmen.