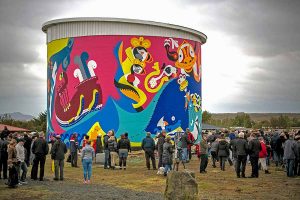 Commissioned by the municipality of Reykjanesbaer, Keflavik, Iceland.

Once upon a time there was a little puffin. He was named Uppspretta because he always was bursting of energy. Living with his parents in a nice clean nest in Keflavik, Iceland, he was very curious to discover the world, and wants to know more about his background and the country Iceland.

The little puffin studied hard, read many books and found out the island is geologically about 20 million years ago by volcanic and geologic activity. According to the settlement of Iceland a Norse chieftain became the first permanent settler on the island, so he heard. Uppspretta knew for sure now he must go to Norway to find himself a nice future wife.

His parents told him that he should not fly above land because he would drop out of the sky. But the little puffin was very curious and stubborn, and when he was ready to leave the nest he flew very far and felt down on land. Looking around him he saw strange buildings, we know as windmills. Uppspretta was not in Norway but arrived in Holland instead.

He lay there waiting for a man to pick him up but he didn’t know at all how a man would look like. He remembered his parents told him once that the people couldn’t fly and sing like birds do, but they were helping themselves with some strange instruments, like for instance musical instruments and airplanes.

The puffin fell asleep and dreamed about people who could play music and would fly back with him to his homeland. They appear like giant violins, trumpet plants and many other instruments.

In the middle of the dream a large ship loomed up and brought the puffin back to sea.

The instruments took the little puffin and launched him above the water and his body transformed into a plane. Geysers and volcanoes helped him to fly high in the sky. A choir of Instruments-people was singing at him to encourage. Everywhere you heard the joy and everything was surrounded with colors. Nature and people helped just a little puffin to get back to Keflavik.

Now his life matters a lot. The little puffin Uppspretta got married with a wife from Norway, became the leader of all puffins Iceland and all over the Island everybody plays music now.

See more about this great project in Iceland on UPPSPRETTA